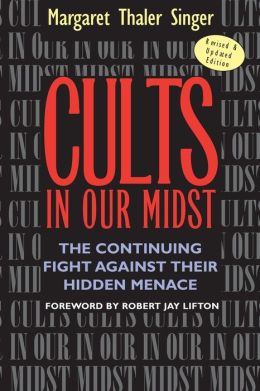 After I left “school”, it took a while for me to admit that it was a cult. After all, who wants to accept that they’ve been conned– hypnotized into spending thousands, losing years and damaging relationships in the process. I justified my tenure to myself; after all, what was the difference between “school” and church, or temple?

In this book the authors outline three factors that differentiate cults from other organized groups such as a Rotary Club, the PTA, Moose Lodge, the Military, etc. They write:

“…  the phrase ‘cultic relationships’ (signifies) more precisely the processes and interactions that go on in a cult. A cultic relationship is one in which a person intentionally induces others to become totally or nearly totally dependent on him or her for almost all major life decisions and inculcates in these followers a belief that he or she has some special talent, gift or knowledge.”

One day I saw my dependence for what it was; in seeing my “teachers” as “more evolved” I abdicated responsibility increasingly seeking permission and approval from them. In horror, I said to myself, “I got to the point where I practically had to ask permission to wipe my ass.” I shared this with another escapee — affectionately known as 007 for orchestrating a great jailbreak in 2012 — and his snarky reply was, “Yes — but are you ‘remembering yourself’ while you’re wiping your ass?”

In that spirit, I will share the three identifying cult traits described by authors Singer & Lalich:

1) Origin of group and role of leader:

Cult leaders are self-appointed, persuasive persons who claim to have a special mission in life and to have special knowledge … (some) claim to have rediscovered ancient ways to produce enlightenment … others claim to have developed (ways) to lead followers into new levels of awareness.

“School” falls into the “rediscovered ancient ways” side of this equation, using esoteric ideas collected, studied and extrapolated on by Armenian philosopher, G.I. Gurdjieff, but neglecting to mention him as its source. It instead makes claims such as “You’ll never find these ideas anywhere else.” “School” neglects to mention other things, too; for example, I didn’t know about its New York City headquarters. Robert heads up the Boston branch — articulate, charming and intelligent — all the other “teachers” defer to him, often saying, “You have to ask Robert”.  At some point, though, “school’s” real grande dame, Sharon, swoops in for a royal appearance, her entourage bright-eyed and bushy tailed.

My first Sharon encounter was one of many screaming sirens that I would dismiss; on occasion Robert would wistfully slip in to some class “discussion” the phrase, “I remember when Sharon said …”. He didn’t bother to explain who Sharon was and we didn’t ask. Then she materialized, strutting to the head of the class, surrounded by reverent subjects, King Robert escorting her, beaming at her. A hush fell over the room as she took her throne; Robert turned to us plebs and said simply, “Ask your questions.”

She kicked someone out, spouted off incomprehensible bullshit in response to our questions then disappeared into the night, her entourage spiriting her away. I was horrified and briefly woke up to the fact that I’d joined a cult. But the next day, when I told my “sustainer” that I found the evening, and the woman, upsetting she encouraged me to “talk about this in ‘class’.” I now recognize that pat line as “school’s” damage control and the staged scene as theater – a performance to make “school” appear to be something it’s not.

After I left I learned that Sharon is “school’s” self-appointed leader and Robert her pawn, the messenger. As the story goes, Alex Horn founded the cult now known as “school”. It was the 70s and in San Francisco — a breeding ground for such “communities” at that time.  Horn deemed his cult The Theater of All Possibility and Sharon, an actress, joined up and eventually married Alex. Amid allegations of various abuses, and an expose via a series of newspaper articles, San Francisco kicked the theater out. It disappeared and re-appeared on the East Coast, where at some point Sharon kicked Alex off the throne and took her seat.

2) Structure — Relationship between Leader and Followers:

Cults are authoritarian in structure. The leader is regarded as the supreme authority, although he may delegate certain power to a few subordinates for the purpose of seeing that members adhere to his wishes and rules. In a cult the leader has the only and final ruling on all matters. Cults appear to be innovative and exclusive. Cult leaders claim to be offering and instituting the only viable system for change that will solve life’s problems or the world’s ills … almost all cults make the claim that their members are “chosen”, “select”, while nonmembers are considered lesser beings.

Cults tend to have a double set of ethics. Members are urged to be open and honest within the group and to confess all to the leader. At the same time, members are encouraged to deceive and manipulate non-members. The overriding philosophy in cults is that the end justifies the means … a view that allows cults to establish their own brand of morality outside normal social bounds … the cult’s specific language is used to justify a double set of ethics making it acceptable for members to deceive non-members.

On the grand “school” hierarchy — New York super cedes Boston. All “school” plebs (even those who know Sharon only as a mysterious name inserted into “class discussions”) exist to bolster, enable and embolden her delusions of royalty as the guardian of grand esoteric ideas and higher knowledge; she safeguarded those sacred gifts and we safeguarded her at all personal costs.

Of course “school” doesn’t tell its recruits and students “Join us and eventually your life will be disregarded — funneled into a mirage that bolsters the delusions of a crazy woman.” It instead tells those “students” that “magnetic center” drew them to “the work”. Not everyone has “magnetic center”, it says; In fact, most don’t. Thus “school” doesn’t allow any old slob into its hallowed halls. Those who are drawn to “the work” feel awfully special, as we rise above the tide of “sleeping humanity”. Like Jesus, we are in the the world, but not of the world.

Our “evolution” depended heavily on our honest confession of transgressions through reporting on “self observations” and doing what is called “being work” (asking for “help” with a “personal weakness”). For — as Robert once told me one day after I’d confessed a “transgression” — “What is the point of being in ‘school’ if you’re going to lie.” Meanwhile, preserving ideas safeguarded by Queen Sharon justified a pyramid scheme of deception, i.e. “clever insincerity”. “Teachers” and “sustainers” lie to “students”; in those rare moments when the “older class” and “younger class” intermingle, the “older students” lie to the “younger students”. This “clever insincerity” “protects school” from those who are “not ready” for its sacred knowledge.

Additionally, “Sustainers” tell their assigned charges that their conversations are confidential, when in reality they report those conversations to “teachers”. “Teachers” use the reported information at opportune moments to appear psychic. “School” omits mention of the inter-school marriages with Sharon as matchmaker, Alex Horn in San Francisco with the allegations of physical and sexual abuse that followed him around, the neglected children and so on, and so on, and so on. “Students” were instructed to employ “clever insincerity”  on “sleeping humanity” when  friends and family questioned the institution — after all they “didn’t get it”. All employed “clever insincerity” on potential recruits, who would have run away screaming had they known that what was being presented as an “esoteric mystery school” was — in fact — a mind control cult.

Most cults expect members to devote increasing time, energy and money or other resources to the professed goals of the group, stating or implying that a total commitment is required to reach some state such as “enlightenment”.

Cults tend to require members to undergo a major disruption or change in life-style. Many cults put great pressure on new members … to become immersed in the group’s major purpose. This isolation tactic is one of the cult’s most common mechanisms of control and enforced dependency.

As a new “student” your commitment is to attend Tuesday and Thursday night classes from which come assignments, readings, daily exercises and meetings with “sustainers” outside of “class”.  Then “school” slips the phrase “three lines of work” into its “class discussions” — in order to “evolve” you must first work on yourself, then work for others and eventually — and most importantly — work for “school”.  Then comes the “Christmas Party“. “School’s” Christmas party super cedes and usurps the time and energy that you should focus on friends and family during the holiday season, and you can imagine how well that goes over.  The dreaded “class outside of class” is another “school”-initiated party that devours the lives of “students”. Fortunately, I never had to participate in the planning of one of those. Maybe someone else can comment on their experiences. Finally, but most critical, comes recruiting newbies. “School” is careful to not set this requirement in motion until you’ve been properly indoctrinated.

Add to the equation that all of this “work” is to be done in “secret” to “protect school” and you suddenly find yourself in an invisible prison that slowly isolates you from the  “un-schooled” — i.e. the rest of “sleeping humanity”.  Over time “demands” increase, as do the number of lies you tell and the number of things you can’t share with the “un-schooled” grow in concert with those “demands”, imposing a secret and ever-expanding isolation; your invisible prison, as school hijacks you body, mind, heart and spirit and you get farther and farther away from the uninitiated friends and family.

One of the most confusing aspects of “school” is that it deems “only life” our testing ground. It doesn’t physically separate its plebs from “sleeping humanity” as some other cults do; many of us lived in our own homes, work jobs out in “life”, and marry “unschooled” spouses. Many “students” eventually lose their “only life things,” damaging marriages, jobs, children etc. Of course, had I stayed in “school”, I may have lost my marriage and found myself in a “school”-arranged marriage — as so many do. It’s very possible that the longer you stay in “school” the more insular and isolated your social circle becomes, until you only encounter the “un-schooled” at line in the Stop and Shop, where — of course — a good “school” doobie immediately tries to recruit them.