This excerpt is the last of a 4-part series on the Country Retreat penned by blog-contributor Charlie Chaplin:

“There is a time in every man’s education when he arrives at the conviction that envy is ignorance; that imitation is suicide; that he must take himself for better, for worse, as his portion; that though the wide universe is full of good, no kernel of nourishing corn can come to him but through his toil bestowed on that plot of ground which is given to him to till.”

One evening, walking from the room where I had just showered and dressed for dinner, I came upon one of the older students berating her daughter.  Apparently the girl was dawdling in getting ready for the Saturday dinner of her final retreat attendance (being too old to return in the future).  I could hear the fear in this mother’s voice that her daughter’s laxity would reflect poorly on her in Robert’s eyes.  She was jabbing her finger at her daughter, saying “you are NOT going to be late for dinner your last time here!”  I can only imagine how the girl perceived her mother’s intense loyalty towards these people who were otherwise absent from their lives.

This moment shocked me, especially as I had just become a father.  It was one event of many that changed my feelings about what it might be like to have my loved ones share the school experience with me.  Since attending more events with the older class, particularly the Christmas parties in New York City, I had gradually come to realize that a good number of students in that class were married to each other.  My initial reaction was mostly envy.  How lucky these folks were to be free of the need for deception that brought me such anxiety!  How fortunate to be able to experience each other at their best, working for their own evolution and that of their classmates!  I remember the impressions class following one Christmas party, when a student spoke of the pride she felt for her husband, seeing the work that he had put into his role in the choir and band.  She welled up with emotion, brought to tears.

Now, seeing the number of children belonging to these school couples, I realized that they did not escape the need for deception, or the deprivation of their time and energy from loved ones.  On an earlier occasion, talking about my impending fatherhood with the same woman I overheard berating her child, she said in a half-joking manner that the worst part of being in school with kids is the amount of money you end up spending on babysitters (her husband was also in OSG, in my own younger group).  I also had not previously considered that the divided loyalty that manifests indirectly as deception and inattention with regards to a spouse outside of school would not disappear if that spouse were in school, but rather become more overt and direct.  I never saw a man rise to speak in defense of his wife if she were being unfairly criticized by teachers, nor a woman defend her husband.

Still, however their divided loyalties affected their relationships with each other, these students had the benefit of being adults with a framework for understanding their situation, and the (admittedly not easy) choice to perpetuate or end it.  Not so for the children.

It was only after experiencing the retreat that I realized how awfully strange these kids must feel about all of this.  On one terribly awkward occasion, a line of children came through the living room just as we were starting a meeting.  Robert and the other teachers were clustered at one end of the room, and the rest of us were haphazardly packed together on the opposite side facing them, sitting on couches, chairs, the floor or standing up.  We sat in silence as the children marched single file, following their attendant adults through the room on a path between us students and the teachers.  Robert admonished the poor planning which had made that walk-through necessary and said it wasn’t good for the kids.  In my mind I agreed with him wholeheartedly.  The older kids especially must have found it odd, and I’m sure they were equally confused as to why their caretakers were being swapped out every fifteen minutes, as we took turns watching them in order to maximize everyone’s meeting time.

My increasing doubts about my own participation in school also began to affect my interpretations of some of the assigned reading material.  Of the commentaries we read, I most clearly remember one about the vastness of space and the relative insignificance of man in the universe.  My CR aim for that period included something about realizing the scale of the cosmos and my own infinitesimal place within it.  This is certainly worthy of contemplation and helpful in gaining perspective.  Yet it did raise an additional question:  If I am so insignificant, to what end was I suffering all the financial cost, time spent, deception and anxiety of school?  It made sense when I felt a personal benefit and believed I was growing and evolving by learning and doing things I would not otherwise.  Then I was clearly purchasing something of value with my time, money and efforts.  However, once it had become a clear detriment to sustaining the things in life I most cared about (primarily my relationship with my wife and child), why carry on?

This is where the loftier notions of school can be used to set a different kind of hook.  In basic form, the ideas presented in school can be broken into two categories, psychological and cosmological.  On the one hand, you have a model of human psychology that can be pretty useful in stretching your mind and your ideas of what’s possible.  On the other hand, you have a mishmash of mystical and occult notions of how the universe works and man’s special place in it.  The way this cosmology is presented, God needs our help in “repairing the universe”, and our failures in school (the most monumental of which is the failure to remain in school) harm not only ourselves, our teachers and our fellow students, but also let down God.

Several times I heard our struggles with deceiving our loved ones compared to those faced by the French Resistance in World War Two, which felt almost offensively phony.  Members of the Resistance faced real threats of physical harm to themselves and their loved ones, including possible violent death.  To the degree that they concealed their activities from their families, it was for their own protection, and they were willing to take these risks and assume the burdens of deceit because the cause for which they fought was so clear, visceral and immediate.  For us, there was no real evidence that we were fighting for any particular cause or helping anybody in any tangible way.

Of course, invoking one’s duty to help God repair the universe (and the shame of selfishness in denying such a sacred duty) went hand in hand with appeals to fear that failure in life was inevitable without school’s help.  Leaving school would cause you to lose everything you value due to your own unchecked weaknesses.  Without school, you would fall fast asleep, your behavior would become entirely mechanical, and you would exist under the “law of accident”.  You would no longer have that mystical protection – not only against outside forces or circumstances, but also (perhaps especially) against yourself.  More than once, the primary factor in my decision to remain in school was the fear that I would cut myself off from an essential source – that the removal of school influence would make me a lesser man, fast asleep in my withering consciousness, and this would lead to the inevitable erosion of my wife and child’s well being, and the decline of my relationship with them.

While exploring my memory of the CR events to gather material for this series of posts, the Emerson quote above (or a rough approximation thereof) kept bubbling up to the surface of my mind.  Emerson’s Self-Reliance was one of the texts we read together in class that made a lasting impression on me, and I pondered it whenever seriously considering leaving OSG (Odyssey Study Group).

On the one hand, reading and discussing this essay with others in class provided an example of what I most loved about being a student in this esoteric school.  I read it with careful attention, underlining passages I found particularly poignant and relevant to my own life.  It was clear that others made similar efforts to engage the material.  Our class discussions of this essay strengthened my picture of our group as a collection of earnest seekers, mutually supporting each others’ efforts towards expanded conscience and consciousness.

On the other hand, the essay was strongly focused on honoring one’s own unique, individual point of view, overcoming cowardice and doing what feels right; so much so that it compelled me to listen to my own doubts and follow my increasingly persistent inner voice, even as it urged me to walk out on the group that had fostered my careful contemplation of this text to begin with.

This quote in particular stuck somewhere deep in my mind, and it forcefully resurfaced when I started to feel most potently the conflict between my ever-expanding obligations to school and my responsibility for my growing family.  I started to feel that the things in my individual life, especially my wife and son, were my “plot of ground”, where I would find my “kernel of nourishing corn”, and that directing my attention and efforts towards abstract, lofty school aims was equivalent to turning to those parts of the “wide universe” in which my nourishment would not be found, but rather only “envy”, “imitation”, and most explicitly, the failure to take myself “for better, for worse”, as my “portion”.

When my son was about four months old, we were told there wouldn’t be another retreat for several 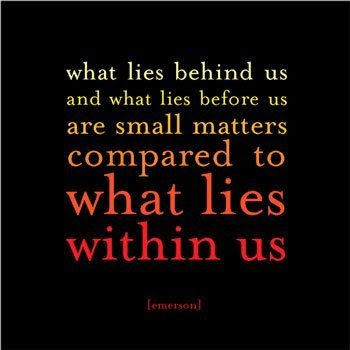 months.  I felt enormous relief, and let go some of the concerns that had been eating at me.  One particular concern about CR was that it seemed common and expected that students with children would bring them along.  While this idea initially sounded intriguing, as a way to give my wife a break and give my son an experience of “higher vibrations”, in practice I found it unsettling.  I thought I could see in the eyes of the older children that they found this whole thing very strange, especially when they were paraded through the middle of our meeting.  Seeing that mother so freakishly concerned that her child’s behavior might reflect poorly on her among this group also gave me pause.  I didn’t want to be in a situation where I would find my love for my son in direct competition with my loyalty for school.

The announcement of a new CR schedule came a few months later, at which time I was seriously considering leaving. It was certainly one of the major factors that pushed me over the edge.  As with Christmas Party preparations, third line work, and the seemingly nonstop run of late-ending classes on Tuesdays and Thursdays, this was one more thing I met with 1% excitement and 99% dread and anxiety.  In the past, I had told myself to power through the interval and make a profit, but now I was feeling only diminishing returns.  I didn’t want to do it anymore.  I was done.