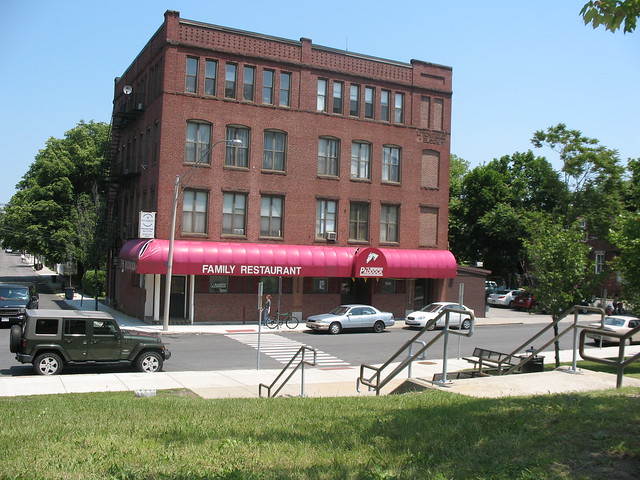 My new millennium “school” days didn’t require me to sing on a bus; or transport a dead fly to a restaurant, slip it into my soup, then pitch a fit about the “deadflyinmysoup, howdiditgetthere???”; or pretend to fall down, call an ambulance, then run away, once transported to the E.R. (yes, I’ve heard these “experiments” reiterated from several different “disgruntled ex-students”, in many separate conversations). But they did flirt with such ridiculousness — case in point: go solicit a free tree from a local merchant for “school’s” Christmas party ($350/month times how many students?) so “school” doesn’t have to spend $30.

Of course, you have all had your own experiences, thus can draw your own conclusions as to whether these anecdotes, circa 1980s, resonate with your experiences:

The Paddock:
The silliest “school” screw-ups related to the secrecy issue itself. At the time we had moved into the Somerville location, next to The Paddock Restaurant; it was a huge space that the older students had put an enormous amount of energy (and sleep deprived daysdyasdays) fixing up. It had huge windows looking out onto some apartments across the parking lot.

In the beginning, the younger class would descend on The Paddock, our newly-instructed-to-be-covered Gurdjieff books in hand. But, as we stood out like sore thumbs in this neighborhood bar, it became off limits.

On many occasions we remembered, but on many did not, to close the curtains for body work — so here we were, this “secret” “school”, whirling and spinning away-till-ya’-puked in front of the neighbors, eye-level hanging out smoking butts thinking… what exactly? Then, of course, add a few, to many New England Retail Express Mercedes trucks parked in a residential neighborhood, and I don’t think there were many East Somerville locals who didn’t think something was up with this group.

GeoffisGoingtoKillMe:
Near the end of my stay, Sharon and Alex had come up for a “class” to kick out Lou and Geoff, in a spectacular kind of pre-orchestrated bullshit session. Geoff’s wife stayed in “school” and shortly after Sharon and Alex kicked Geoff out, at the end of one “class”, she came to me in a panic that she had locked her keys in her car.

“Geoff is going to kill me”, she said. Continuously. “GeoffisgoingtoKILLME.”

I was a car guy. I ran a parking lot. I had a tool to open car doors; but it wasn’t easy. We went over the options: leave the car overnight, get a ride from so and so, get the car towed, (call triple A?). But all ended in “Geoffisgoingtokill me”. So outside we went, and I — with my buglar-ious tool — working on a Volvo wagon, when what doth mine eyes see, but a Somerville Police cruiser pulling up along side.

I am a good bull shitter: just having a slice at the Paddock, happen to have this tool legally, about to call my friend Anthony C at _____towing company — a Somerville-semi-wannabe-mafia-run tow shop; dropped some names, and all is going well, until… here comes M, walking up to me after “class” looking to pay me money back from so and so. This person comes over and the cop says, “Do you belong to that weird group who meet upstairs?” Oh no, not me; just getting a slice, etc. and off they go.

But damage done; at the next “class” my head was on the plate and what Dave Archer called part family, part lynch mob, had me in their sights for “flagging down a cop”, for endangering “school”, for breaking secrecy (wait, what secrecy? what about the neighbors watching us flail about, the trucks, the pizza place, the whatever. What about protecting Geoff’s wife?) But I was done.

Suspenders and Yoga Mudra:
I did have that fear of leaving that has so often been described — that life

outside “school” meant you’d be living and dying like a dog — that the spiral where you were either going up or down would be heading down for me. I was surprised and shocked to have continuing visits from older students at my workplace encouraging me to come back and “leave properly”. But I knew what those sessions were like.

The older group had recently come back from a retreat and all the men had strangely abandoned belts and all were wearing suspenders. And I noticed that a few of the older students were continuing to do this thing with their hands… like a Hindu statue… the mudra….holding their thumb and forefinger together when talking…..but yeah, you’re my age and you move furniture all day. So, yeah, cult. Hello.

No regrets; no pain no gain. I am fine and have done well and perhaps I am more of a cat person than the dog they envision that dares leaves “school”.